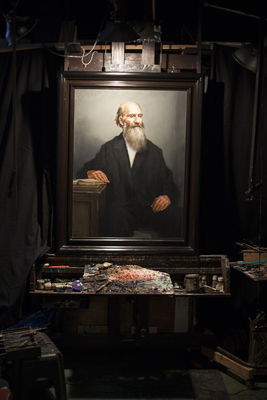 James White, co-founder of the Seventh-day Adventist Church and one of the first presidents of the General Conference of Seventh-day Adventists, began his career of over thirty years as a humble Millerite preacher, travelling from place to place on a borrowed horse with a Bible, a prophetic chart, and notes for just three sermons. His first speaking tour met with astonishing success, winning a thousand converts to the Millerite faith, and success continued to follow him as he served the church as founder of the Review and Herald and Pacific Press Publishing Associations, publisher of the Advent Review (Adventist Review) and Youth's Instructor (Insight), and co-establisher of Battle Creek Sanitarium and Battle Creek College (Andrews University). Husband to the prophetess Ellen White and father to four children, two of whom outlived him, Elder White divided his time between family and church administration, helping to organize the first General Conference and even arranging the first Seventh-day Adventist camp meeting. He was not only a brilliant entrepreneur and administrator but also a great man of God, and his influence is powerfully felt throughout the history of Seventh-day Adventism. The library at Andrews University is named in his honor.

For more information on the unveiling ceremony, see the News Release.

Harry Ahn, an internationally recognized artist who has lent his talent to Andrews University as a contract teacher for the past 25 years, has once again put brush to canvas to produce a portrait of Ellen G. White in his signature oil paint style. A graduate of the MSH Studio School of Art, Ahn developed a passion for Biblical and religious themes in his art, which led him to become a portrait artist whose paintings exhibit a rare depth of humanity and the beauty of the soul, a quality acknowledged many times over by prestigious awards. Ahn attributes his unique talent and success to the grace of God and, when commissioned to paint the portrait of James White now displayed in the library bearing the founder’s name and for which the new painting will be a companion, he expressed how honored he felt to be entrusted with such a task.