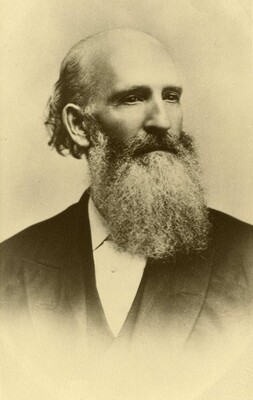 James White, born in Palmyra, Maine, on August 4, 1821, was a Millerite Adventist. Following the Great Disappointment of 1844, he became a co-founder of the Seventh-day Adventist church. On August 30, 1846, he was married to Ellen Gould Harmon. In 1849 he began publishing Present Truth, the first of several Seventh-day Adventist publications that he founded. He served several terms as president of the General Conference of Seventh-day Adventists (1865-1867, 1869-1871, and 1874-1880). He also founded several institutions operated by the church including the present Review and Herald Publishing Association and the Pacific Press Publishing Association. White died in Battle Creek, Michigan, on August 6, 1881