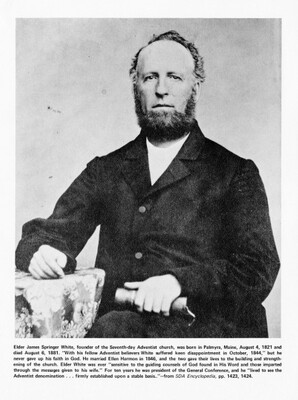 White Document File WDF 2069 #10. James Springer White, co-founder of the Seventh-day Adventist church, was born in Palmyra, Maine, August 4, 1821 and died August 6, 1881. With his fellow Adventist believers White suffered keen disappointment in October, 1844, but he never gave up his faith in God. He married Ellen Gould Harmon in 1846, and the two gave their lives to the building and strengthening of the church. James was ever sensitive to the guiding counsels of God found in His Word and those imparted through the messages given to his wife. For ten years he was president of the General Conference, and he lived to see the Adventist denomination...firmly established upon a stable basis. From the Seventh-day Adventist Encyclopedia, pp. 1423-1424