The Grand Canyon of the Yellowstone 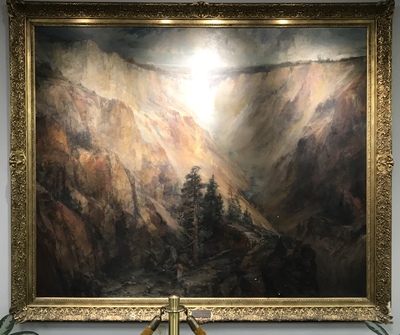 Lucien Powell (1846-1930) was a well-known landscape artist whose work is found in the Smithsonian, Corcoran Art Gallery, Georgetown University, etc.

The painting was owned by Mary Henderson (1842-1931), who had 200 of Powell's paintings at the time of his death. She was married to John B. Henderson, a lawyer and former senator from Missouri. He was the author of the 13th amendment abolishing slavery in the US and was one of seven Republican senators whose votes defeated the impeachment of Andrew Johnson.

Mary Henderson was a suffragist, author, and well-known Washington, D.C. socialite. She was strongly health conscious and wrote a 700 page book called "The Aristocracy of Health." A strict vegetarian, she was also strongly opposed to alcohol and tobacco. She originally donated the painting to the Battle Creek Sanitarium. The painting was placed on loan at the James White Library in 1983 from Adventist Heritage Ministries.